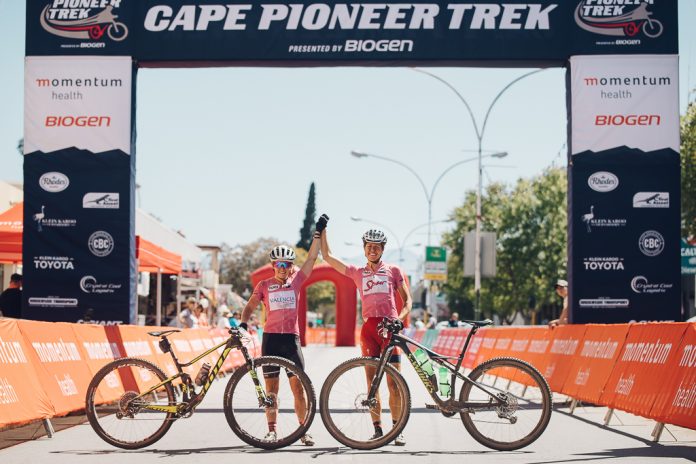 The Spur/Red-E and Spur/Valencia teams of Alan Hatherly, Matt Beers, Ariane Luthi and Amy-Beth McDougall secured the 2017 Momentum Health Cape Pioneer Trek, presented by Biogen, titles on Saturday the 21st of October in the Klein Karoo town of Oudtshoorn. Though both the men’s and women’s general classification champions were unable to win the final stage, surrendering stage victory to NAD Pro MTB and Ascendis Health, they still secured the overall victory by 1 minute 42 seconds and 1 minute 40 seconds respectively.

The final stage of the race was a 64 kilometre long loop from Oudtshoorn, through the Chandelier Game Farm and back to the capital of the Klein Karoo. It featured 1 150 metres of climbing, most of which took place on a series of steep loose shale climbs in the game farm. The route was far from easy, despite its relatively short distance and in previous editions the stage had caused general classification shake-ups with riders puncturing and haemorrhaging time as panic set in.

Once again the grand finale served up drama, this time it was pre-stage however as the third placed women’s team of Nicola Giliomee and Frankie du Toit were disqualified by the UCI commissaire for receiving outside assistance during stage 6. The Junto Ladies team had been forced to stop in the neutral zone to fix a broken valve stem. Team Spur mechanic JP Jacobs assisted Giliomee and du Toit in their repairs, as they were under the impression he could do so in the neutral zone, but the race commissaires ruled otherwise – evicting the third placed team from the race.

In the men’s race there was fortunately no mechanical or rule infringement induced position changes on the general classification. In fact the only major team to lose ground was the SPOT Africa combination of Timothy Hammond and Derrin Smith. Smith is a part-time mountain bike racer, fitting training in around his busy farming schedule, and the exertions of the week were clearly taking their toll. He and Hammond eventually finished in sixth position on the stage, but managed to hold off the KTM Pro Team who finished above them on the stage to retain fifth overall.

At the front of the race Team Spur/Red-E were keen to make the going tough for NAD Pro MTB. Hatherly and Beers took the fight to Nico Bell, Gawie Combrinck and the KMC Fruit to Go team of Bram Rood and Gerben Mos. “We stayed with them for the first fifteen kilometres or so and then they just went to hard” Rood confessed. “We are happy with third place overall. The other teams are really strong so it’s okay that we are the best of the rest,” said the KMC rider.

“The stage really suited me as it was either up or down, so there was no real advantage in drafting” Hatherly said. “As the yellow jersey wearers the unwritten rule is that we do not have to set the pace, we can just defend our lead. But we love to race so we helped NAD animate the racing” Beers elaborated. “It was pretty much full gas all day” Combrinck confirmed. “I really enjoyed the stage. I love this hard rocky riding.”

With both NAD Pro and Spur/Red-E driving the pace; the leading two teams flew through the final kilometres and entered Oudtshoorn together. Once again it came down to a sprint finish but this time Bell and Combrinck emerged victorious after both riders outmaneuvered Alan Hatherly ahead of the sharp final turn. NAD Pro claimed a consolation stage win, but the 2017 Cape Pioneer Trek title went to Spur/Red-E; by 1 minute and 42 seconds, after seven days of racing.

The women’s race was also tightly contested on the final day with the Ascendis Health duo Robyn de Groot and Sabine Spitz racing to reel in the remaining 2 minute and 29 second deficit to Spur/Valencia. Try as they might though they could not shake Lüthi and McDougall; even a spectacular crash by Lüthi, which left her with a saddle pointing skywards for the final ten kilometres. Though De Groot and Spitz crossed the finish line first, 49 seconds ahead of Lüthi and McDougall the Swiss and South African paring had done enough to win the UCI women’s competition by 1 minute and 40 seconds.

When asked if she dug deep to fight back from being physically and emotionally spent to rise to the level of her Ascendis Health rivals, to match the level of her partner Lüthi, or to prove a point to herself McDougall responded: “A bit of all of those really. I gave everything every day and finished completely broken after each stage. I started the next stage knowing I would have to give everything again. It was really tough but I think I have proved something to myself.”

In a category where both De Groot and McDougall suffered with injury or illness during the event, their ability to battle through the pain barrier to not just complete the stages but to compete at the highest level displayed once again the courage required to race as a professional mountain biker.

With the conclusion of the 2017 Momentum Health Cape Pioneer Trek, presented by Biogen, the mountain biking fans can relive the drama of the race for a final time with the daily highlight video. The stage 7 highlights can be viewed on the Cape Pioneer Trek Facebook page and the Dryland Event Management YouTube Channel from 20:00, Central African Time, on Saturday the 21st of October. For more information on Cape Pioneer Trek please visit www.capepioneer.co.za.

ALWAYS HERE FOR YOU